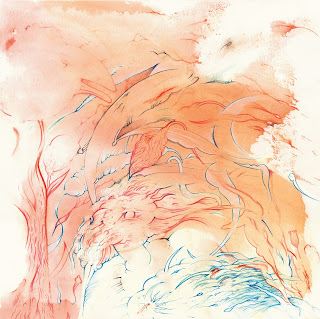 Helios is typically credited for our solar well-being, but let's not forget that his four horses have been the ones doing the heavy lifting day in and day out all these years…

They must have bailed on the bossman somewhere above Connecticut because on September 9, 2013 in New Haven it was not Pyrois, Aeos, Aethon, and Phlegon but Tiger Hatchery (Ben Baker Billington, Mike Forbes, Andrew Scott Young) and Paul Flaherty who brought the heat. Neither party is any stranger to fire music: after cutting their teeth in Texas and Cleveland like so many other purveyors of the ecstatic now Tiger Hatchery congealed in Chicago and their blistering take on free jazz earned them a recent entry in the venerable ESP-Disk'ography; Paul Flaherty needs little introduction having lent his biting reed attack to countless outfits since his 1978 debut, among them mind melds with Chris Corsano, Thurston Moore, C Spencer Yeh, and Bill Nace.

Live In New Haven documents both entities convulsing as one, with Forbes' and Flaherty's labyrinthine saxophone mutations squirming against the brink of the Billington-Young skins 'n' strings throb unit. Yet despite the volcanic nature of the session, the quartet exhibits a sage capacity for both restraint and an elevated plane of almost-composed melodicism unheard in Tiger Hatchery's corpus of abandon as a trio.


LP edition of 300, with front and back cover art by Graham Lambkin.